The store will not work correctly in the case when cookies are disabled.
This site uses cookies to improve your browsing experience. By continuing to use this site, you accept these cookies. Accept

FREE DELIVERY TO USA AND CANADA

Free delivery when you spend £40 or more

Is Pocket Living The Next Interior Design Trend? 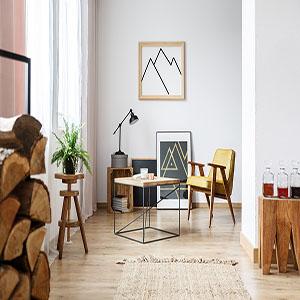 The rise in remote working that has surged over the past year has created an interior design trend away from open-plan living and towards smaller functional pockets, according to interior designers and architects.

The trend, known as pocket living has emerged due to two entirely conflicting design styles. Over the past few decades, the open plan has been the dominant trend in design, with large multi-purpose rooms decorated with a range of neutral tones and luxury homeware.

This desire for space and the feeling of openness is still important to many homeowners, but the past year has emphasised the need for some level of privacy and solitude.

People require home office space where they can shut off distractions and focus on tasks in a way that an open-plan setting may not allow but do not necessarily want to lose the social benefits that open-plan rooms allow.

Instead, pocket living works as a compromise where rooms are either repurposed or divided to provide some rudimentary space to work during the week without losing that original charm and function the room had.

How long this trend will remain remains to be seen. Interior design over the past year has seen a radical shake-up of design principles that have endured for the past few decades.

Categories: Home Decor
Tags: uxury homeware
Posted By: admin
Search
Recent Posts
Recent Comments
Archives
Categories
Meta
Compare Products
Compare
Clear All
You have no items to compare.
My Wish List
Last Added Items
Go to Wish List
You have no items in your wish list.
follow @pushkahome for all your interior inspiration