The store will not work correctly in the case when cookies are disabled.
This site uses cookies to improve your browsing experience. By continuing to use this site, you accept these cookies. Accept

FREE DELIVERY TO USA AND CANADA

Free delivery when you spend £40 or more 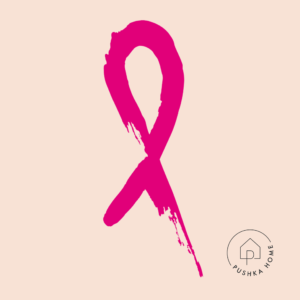 2020 has been a powerful reminder of how the choices we make, and the actions we carry out have the ability to help and protect the most vulnerable amongst us. That more than ever is true when it comes to people facing cancer. That is why this year, we at Pushka Home wanted to help a little where we could.

October is Breast Cancer Awareness Month, an annual campaign created to spread awareness about the disease and raise money for research dedicated to fighting it. In support of this, we have partnered with The Pink Ribbon Foundation (Reg.Charity. No. 1080839) and will be donating a percentage of our October proceeds to the trust.

The Pink Ribbon Foundation is a grant making trust with a mission to fund projects and provide financial support to UK charities which relieve the needs of people who are suffering from, have been affected by breast cancer, or who work to advance the understanding of breast cancer and its early detection and treatment.

There are a large number of such charities in the UK, each as deserving as the next. Many of the charities supported are the smaller ones, which operate on a shoestring.

It relies on the hard work given by Trustees, interested parties and its Patrons. This is done in order to maximise the amount, which goes to the charities that benefit from the funds raised.

Every year the Foundation invites charities in the UK to apply for a grant in order to help them continue their vital work or to fund one off projects. Some of the many charities who have benefitted from a grant from the Foundation include:

Categories: Uncategorised, Home Decor & Home Accessories
Posted By: admin
Search
Recent Posts
Recent Comments
Archives
Categories
Meta
Compare Products
Compare
Clear All
You have no items to compare.
My Wish List
Last Added Items
Go to Wish List
You have no items in your wish list.
follow @pushkahome for all your interior inspiration